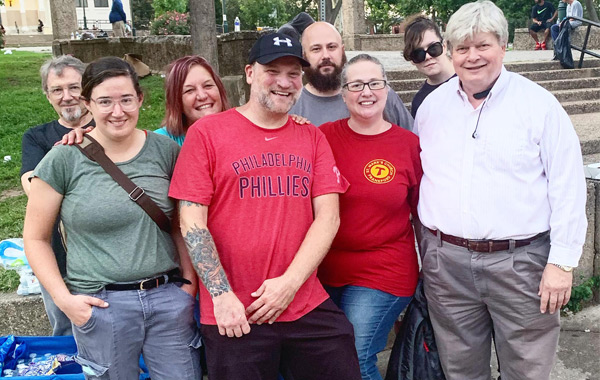 It was a crazy night of outreach, to say the least.

When we arrived at McPherson we were met by a man who had just been attacked by a group of teens and roughed up. We called the PPD to come out and take a report.

As we were giving a report I saw a man laying on the ground and knew it wasn’t good. I ran to the man to assess the situation. The man who was attacked was there helping turn him over.

I reversed the man as he was turning purple. It took two Narcan doses to reverse him. While I administered Narcan, the man who was attacked was doing chest compressions. A PPD officer came over and did the knuckle to the sternum pokes. After two Narcans and about 8 minutes later the man came to life. I sat and chatted with him for a bit and then gave him a jacket as he was freezing from being in shock.

I met a man in his late 20’s named A who was in tears. He asked if I’d call his mother to come pick him up off the streets as he didn’t want to be out there anymore. I did. She agreed to come from across the bridge in Jersey and pick him up. I gave her some numbers of centers to call. I took A to meet his mom and dad on Aramingo and when I pulled up in the CVS lot he said, “There was a reason I met you tonight. You didn’t save just one life tonight back there. You saved two.” We got out of my car and chatted briefly with his parents and said our good-byes. He told me he’d let me know how he was doing. I said I just didn’t want to see him back out on the streets again.

After they left, I sat in my car tonight by myself and tears filled my eyes as I thought about how much happened in an hour and a half time.

The good. The bad. The indifferent.

I am so thankful and fortunate for the team that showed up tonight and our three friends from St. Mark’s Church, Frankford who met us out tonight and we all formed one amazing team and touched the lives of countless people and provided them compassion bags and food and some hope.

If you haven’t been trained on how to use Narcan, or are educated on Naloxone in general, send us a message and we can set something up to get you on the right track.

Thanks to everyone who continues to support us. It makes a huge difference.

The man who assisted with the reversal is named P and he needed sneakers. I walked back and grabbed him sneakers and socks and a jacket as he said he’s been cold. He was thrilled with his new gear and said the sneakers, jacket and compassion bag I brought were matching so well and he had just gotten a new winter beanie that was the same color. He was proud and stoked of his new gear. So thanks again to all who donate and support.